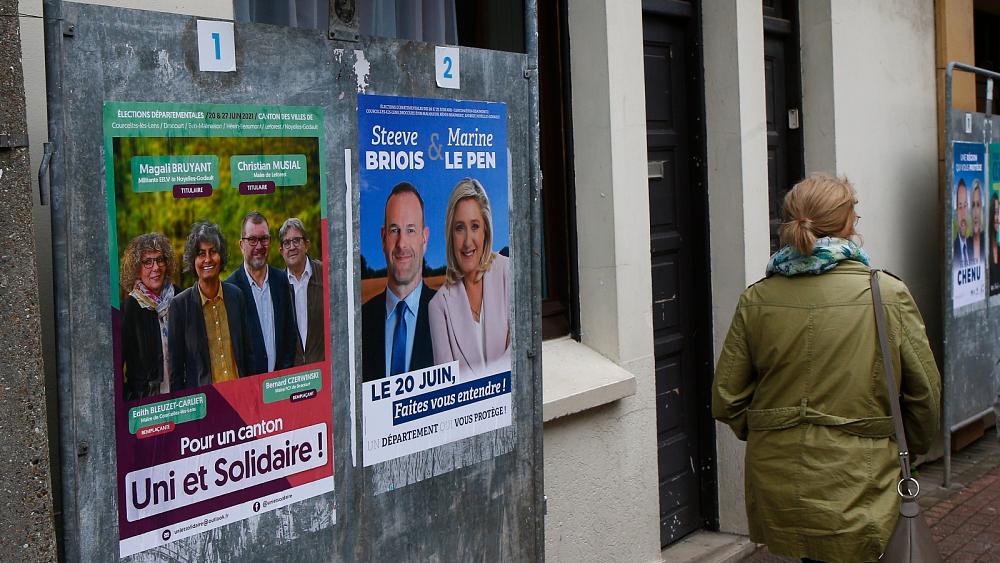 The far-right National Rally party failed to secure a single region in the decisive second round of voting for France’s regional elections, according to preliminary estimates for French national media.

The second round had been seen as a key test for Marine Le Pen who had been hoping to win in one of the country’s regions.

Estimates on Sunday put turnout in the second round at 34.5%, according to Ifop-Fiducial estimations for several French media outlets.

Turnout was at a record low 33% last week, down around 16 points from the first round in the 2015 regional elections.

Many politicians and experts said it proved there was a “democratic crisis” in France’s political culture, with concerns that voters do not see a point in heading to the polls.

The traditional left and right-leaning parties, the Socialists and Republicans, held on to a number of France’s regions, according to preliminary estimates.

President Emmanuel Macron’s La République en Marche party had an extremely poor turnout in last week first round, finishing first in no regions while Marine Le Pen’s far-right had a poorer showing than expected, with a National Rally candidate finishing first in just one region.

Parties had banded together to prevent a far-right candidate from taking control of Provence-Alpes-Côte d’Azur and they appeared to be successful on Sunday.

Last week, Green Party candidate Jean-Laurent Félizia dropped out of the second round in the region in order to prevent Mariani from winning. The Greens (EELV) European MEP Yannick Jadot told French cable news that it would be a “political error” for Félizia to not stand down and support Muselier.

Félizia wrote in a tweet on Monday that he would vote for Muselier in the second round.

“I don’t want to see the far-right in our high school administrations. I will, because I do not want to see information guidance for young people on abortion & contraception questioned,” Félizia said.

For her part, Le Pen blamed low turnout on her party’s poor showing. The National Rally was down several points compared with 2015.

“I need you to elect Mr Mariani. For that, you have to go and vote. I need you to reverse the results of the first round,” Le Pen told Franceinfo last week.

“Mobilisation is the key to the victories to comes,” Le Pen said after the second round of voting, stating that there was a “local democratic crisis”.

Many are concerned that the record low turnout signals a crisis in France’s democratic system, with electoral “apathy” at an all time high.

Pierre Moscovici, a former left-wing economy minister and president of the Court of Auditors, said the elections showed “confusion” and “electoral apathy”.

“The French democratic crisis is profound: the presidential election address this vital issue,” he said in a tweet.

“There is an urgent need to reinvigorate representative democracy, facilitate voting procedures to encourage the mobilisation of voters,” argued left-leaning newspaper Libération’s deputy managing director Paul Quinio in an editorial.

Presidential and legislative elections typically galvanise more voters but lower turnout than expected, at 74.7%, plagued the 2017 elections as well.

Turnout for the second round of last year’s municipal elections, which took place shortly after France exited its first COVID-19 lockdown, was at around 41%.