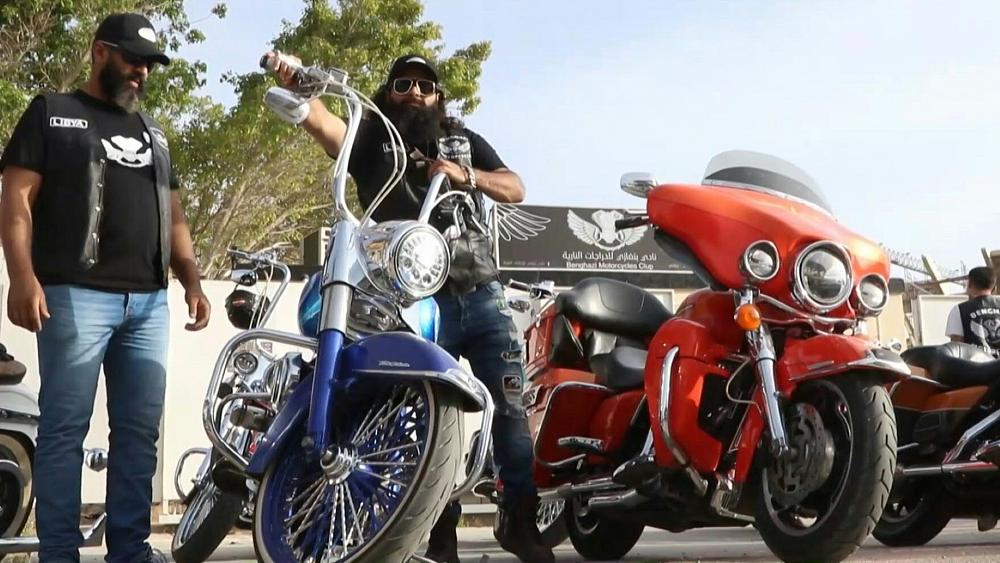 Meet the Libyan biker gang changing perceptions of their city

For the club’s members, biking is not just a passion. It’s also a way of portraying the city in a different light – a semblance of normality despite Libya’s recent violent history.

The club was established in 2014, right in the thick of Libya’s second civil war and three years after the fall of Libya’s longtime leader Muammar Gaddafi.

Even at that time of rampant insecurity before Islamist militias were expelled, club members staged public shows and parades through the city.

The convoy of Harleys, Hondas and Kawasakis parade two by two through Benghazi’s alleys and main roads.

Onlookers often watch or film the gang, and honking car drivers contribute to the cacophony as they ride proudly past the war-battered buildings through the city.

“We’ve had French and British crews film us, and we’ve shown them that not all Libyans make war, they’re not all criminals,” he adds.

What happened in Benghazi?

Benghazi is a Mediterranean port city in the north of Libya.

It is the country’s second largest city and was the centre of the 2011 uprising which overthrew the Gaddafi regime.

Muammar Gaddafi had been in power in Libya since a coup d’état in 1969 and was killed in 2011 during the first civil war.

From 2011, there was civil unrest in the country, including a second civil war which broke out in 2014 until a permanent cease-fire was called in late 2020.

The motorcycle club, which has a Harley-Davidson-inspired eagle as its emblem, boasts 120 members and they are all self-proclaimed enthusiasts.

As well as working to improve the image of their city, the club has changed the perception of bikers.

Before the revolution, bikers were marginalised members of Benghazi society and considered criminals by many.

“But that image has changed,” says Fakhri Mustapha al-Hassi, the club’s vice president. “Now families and children come to have their picture taken with us.”

Club members also raise funds for charities, stage “parades for peace” and take part in official functions, such as a recent tribute to Omar al-Mokhtar, a hero of Libya’s resistance to Italian occupation in the early 20th century.

During Ramadan, the bikers distributed snacks and drinks to motorists running late for “iftar”, the meal that breaks the daily dawn-to-dusk fast.

Watch the video above to learn more about the Benghazi Motorcycle Club.